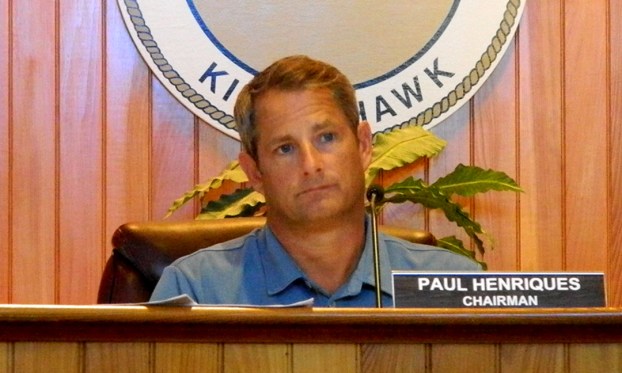 Among the evening’s regular agenda items was a review of the Recreation Committee FY 2020-21 master plan. Henriques opened the discussion with a comment that he thought the plan was adequate and did not feel there was anything significant to add. Tabb commented that he felt the plan could use a couple of minor changes, but nothing important enough to revisit.

Heffner’s suggestion led to a short discussion on where in town such an event – previously held at the Promenade on Promenade Lane – could now be held.

Henriques pointed out that the event is still part of the master plan and Tabb suggested continuing the discussion at the next meeting. He then moved to approve the plan as presented, which passed with unanimous consent.

The next discussion focused on the new Kitty Hawk Woods Connector Trail.

According to Henriques, after negotiating the 1.8 mile trail following the July 15 dedication ceremony, it appears there are several thick vines hanging near the trail that pose a danger to anyone on a bicycle. In addition, there are several trees down blocking some of the pathway through the preserve.

“All in all it’s a beautiful trail,” said Henriques. “But some parts of the trail are difficult to see and at one part it is difficult to identify what direction the trial goes. Some of the trail needs to be wider.”

“He doesn’t do very much upkeep,” offered Mayor Gary Perry, adding that the Coastal Reserve agreement calls for volunteers to be available to work under the guidance Alnes.

Henriques went on to say he has taken a class and has been approved to be a volunteer in the preserve.

Tabb and other committee members said they were not aware that there was a certification process for volunteers, which led Mayor Perry to recommend a greater effort at getting the word out.

During additional discussion on the topic, it was pointed out that there are additional directional signs coming as part of a Boy Scout project.

Two other issues discussed, with no action taken, included the need for additional portable toilets and general safety concerns for bicyclists and pedestrians at various locations in town.

It was agreed that while there is a need for more portable toilets, available space is an issue and they do not need to be at every beach access.

The only public comment for the evening came from Cheryl Light, who said she lives near Hurdle Street and is concerned her property will be condemned and taken to provide more public parking.

Henriques responded saying that the condemnation process was discussed, but the actual condemnation of any property was never actually on the table. He then added that as volunteers on the committee, the topic was a small part of the overall discussion on the need for additional parking, which is an issue in town.

With business for the evening completed, October 26 was selected for the next meeting date.