Manteo student raising puppy for Leader Dogs for the… 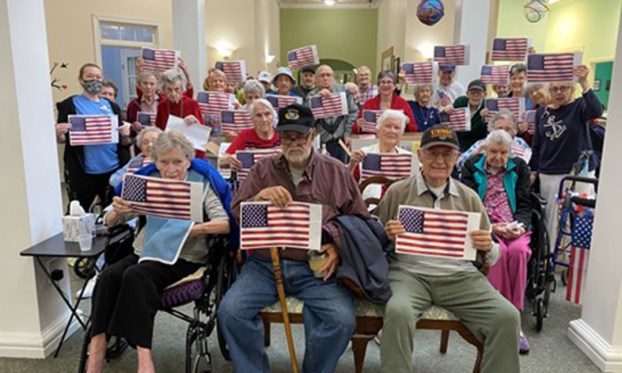 What began with three questions to each Spring Arbor Assisted Living resident evolved into a wonderful celebration of a long military history. Each resident was asked: Are you a veteran? Do you have family currently serving in any branch of the military? If you could say one thing to today’s active military, what would your message be?

The stories that were shared gave a new sense of community as many were able to relate to what happened to a neighbor down the hall. Interviews of the children of veterans will round out the effort.

A remarkable outcome of the questions is a 2021 booklet of the military stories to be published in time for Veteran’s Day. To identify and respect the veterans, a new Honor Wall was placed near the library.
There was great fun in the shopping trips for beef jerky, hard candy and lip balm to go in care packages that soon went out to active military.

Nancy Bryant sent a box to her Army grandson Dustin Collins. Mary Utz sent a care package to her Navy grandson, Jackson Utz. Libby Neely sent two boxes to two brothers, her grand-nephews Marine Chalmers Carey Jr. and Stephen Carey, who she said was off training with the Army Rangers. Staff was included and Jennie Brown sent a package to her great nephew in the Airforce, O’Brian Shaw.

A cookout got everybody together for a group photo to include in the care packages.