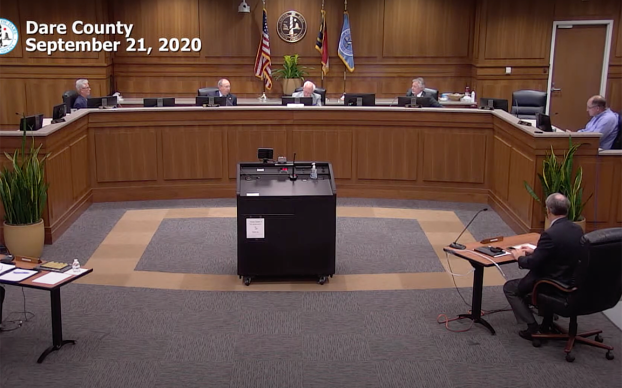 The resolution would be the seventh time that the Dare County Board of Commissioners voiced its opposition to offshore drilling and testing. The first resolution was passed in 1998.

This time, the resolution has a twist to it. On Sept. 8, President Donald J. Trump signed a presidential order extending the moratorium on offshore drilling and seismic testing to both coasts of Florida as well as Georgia and South Carolina.

North Carolina was left out.

Woodard announced that the senator was successful. “North Carolina will be included in the presidential moratorium,” said Woodard.

The proposed resolution was withdrawn.

“We were glad when Senator Tillis asked for the moratorium,” said Michael Flynn, coastal cdvocate with the North Carolina Coastal Federation, on Tuesday. “We are still awaiting official documentation. The moratorium expansion is an action that the Federation and partners of the Don’t Drill NC Coalition have sought since Pres. Trump first proposed to open the coast to offshore drilling back in 2017. We hope the moratorium will be expanded to include the entire Atlantic Coast.”

Unanimously, the board continued support for the terminal groins and jetties to protect the state’s shorelines and stabilize Oregon Inlet.

The resolution calls on the county’s legislative delegation in Raleigh and Washington, D.C. “to work collaboratively to introduce legislation that will provide long-term stabilization that is so desperately needed at Oregon Inlet including, but not limited to the transfer of property from the National Park Service required to anchor the jetty system.”

In introducing the resolution, Woodard said U.S. Rep. Gregory F. Murphy wanted to pursue this, but not without board approval.