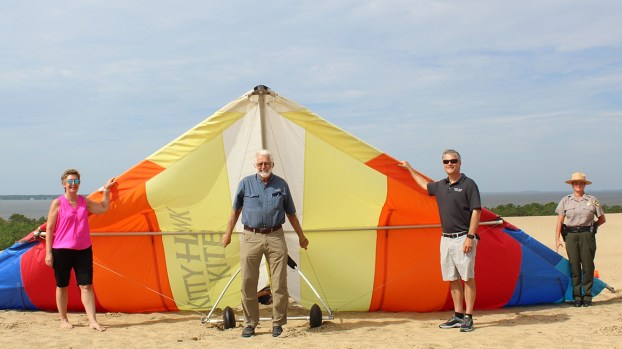 John Harris has been honored by Visit NC, a unit of the Economic Development Partnership of North Carolina, as a recipient of its 2020 Winners Circle Award for his contributions to tourism in the state.

The Winners Circle Award originated in 2004 in an effort to recognize communities, organizations, events and people in the tourism industry that have made significant and continuing impacts to the growth and success of North Carolina’s tourism industry. The award is given annually and is generally presented at the Visit NC 365 Conference on Tourism, the largest gathering of the state’s tourism industry leaders. This year’s conference, which had been scheduled for March, was canceled due to COVID-19.

The award was presented by Heidi Walters, Visit NC’s director of partner and industry relations, at Jockey’s Ridge State Park, the location of the Kitty Hawk Kites Hang Gliding School. Kitty Hawk Kites was founded in 1974 in Nags Head as a hang gliding school and repair shop. It has since grown to become the world’s largest hang gliding school and the Outer Banks’ premier retail and outdoor recreational business.

Lee Nettles, executive director of the Outer Banks Visitors Bureau, was in attendance to offer remarks about Harris’s contributions to Outer Banks tourism and the growth of the hang gliding industry.

“John’s career and life have been based around helping people discover the joy of connecting to wind and water,” said Nettles. “In doing so, John has contributed mightily to the brand of the Outer Banks and the connection people feel with the State of North Carolina.”

Harris acknowledged the many people who provided him support, assistance and encouragement as he grew Kitty Hawk Kites to what it is today. In particular, Harris recounted the support of Hugh Morton, the renowned photographer and owner of Grandfather Mountain, who allowed him to be the first person to hang glide from its 1,600-foot high rock pinnacle. “He really opened my eyes to the power of public relations – what you could do with a photograph and a tagline,” Harris said.

Since 1974, Kitty Hawk Kites has been “Teaching the World to Fly” by building communities of employees and customers with uplifting service; unique, fun products; and adventure experiences in travel destinations.

Kitty Hawk Kites has grown to over 20 stores located along the coast of North Carolina, in addition to stores in Destin and Fort Walton Beach, Fla.; Virginia Beach, Va.; Long Beach Island, NJ and Morningside Flight Park in New Hampshire. Kitty Hawk Kites is reported to be the largest brick and mortar kite retailer in the United States, the leading outdoor adventures company on the Outer Banks, the largest hang gliding school in the world and one of the few kiteboarding resorts in America. They also offer more than 25 adventures in addition to hang gliding.