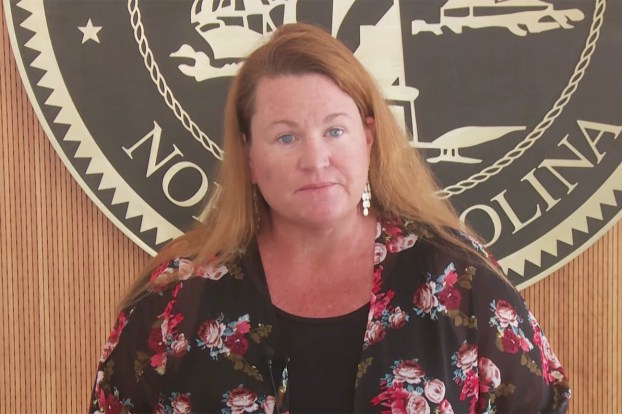 Sheila Davies, director of the Dare County Department of Health and Human Services

The Department of Health and Human Services reported 14 new cases on Sunday. Another new one was reported Monday at 12:30 p.m. and three more were reported around 5:45 p.m. Sixteen of 18 new cases are local residents.

Of Sunday’s positive tests, two residents are 17 or under (one male and one female), seven are between 18 and 24 (four males and three females), three are 25 to 49 (two females and one male) and one female is 50 to 64 years of age. All were reported to be in home isolation. The nonresident case is a female between 25 and 49 years of age and has been transferred to her home county.

One Monday case is a male, 65 years or older, who was hospitalized in the county but is now home. Two resident males age 18-24 are reported to be in home isolation. A female nonresident 25 to 49 years of age has transferred isolation to home county. 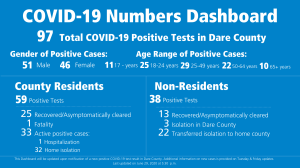 In a message released Monday afternoon, Sheila Davies, director of the Dare County Department of Health and Human Services, stated that the spread of COVID-19 is not a local versus visitor issue: “The spread we are seeing currently is local to local spread because people are not following the guidelines.”

“The majority of our recent cases are locals who acquired the virus by direct contact with others,” stated Davies. “The majority of the spread was not at the grocery store or restaurant, but rather through direct contact at a large gathering where people were not maintaining social distancing and were not wearing face coverings.”

Dare now has 36 active positive cases with one hospitalized outside Dare County and 35 reported to be in home isolation (33 residents, 3 nonresidents).

According to Kelly Nettnin, communications specialist with DCDHHS, Dare County currently has approximately 20 contact tracers with another 20 on standby. Nettnin stated that contact tracers do not go to homes or workplaces.

In North Carolina, total lab-confirmed cases have reached 65,484 individuals. The figure reflects a decrease of 263 new cases between Sunday and Monday. Of the total cases, 45,538 COVID-19 patients are presumed to be recovered.