Dare Board of Elections looks at alternative voting sites 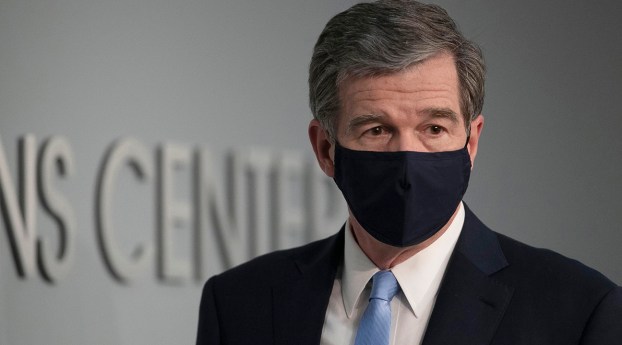 As Nevada prepared to start reopening parts of its economy last month, a team of medical experts recommended to Gov. Steve Sisolak that he require people wear masks in public to help stop the spread of the coronavirus.

The governor promoted masks but resisted making them a requirement, saying he feared the rule could create a backlash for businesses trying to enforce the order on customers.

With reported coronavirus cases rising the past four weeks, Sisolak on Wednesday finally decided to take their advice and impose the mandate, saying it was necessary to protect people and keep businesses open.

“People aren’t wearing these,” he said, holding up and waving a cloth face mask. “It is troubling and it is really discouraging that this has become a partisan issue about whether or not people want to wear a mask.”

Sisolak’s slow-stepping into the mask requirement reflects a fraught decision-making process among many governors as they listen to a variety of sometimes competing voices on how on to respond to the spreading virus outbreak. The result is sometimes confusing and creates mixed messages for the public.

With reported coronavirus cases rising rapidly in many states, governors are getting lots of advice on what they should do. Unions want to be sure workers are protected on the job. Many business owners say they can’t afford another forced shutdown. Public health officials urge them to make mask-wearing a statewide requirement. At the same, governors are facing blowback on the right over business restrictions and mask regulations.

Dr. Brian Labus, an assistant professor at the University of Nevada, Las Vegas School of Public Health and a member of the medical team advising Sisolak, said he knows the governor has to weigh public health advice against political and economic considerations.

“We were told not to think about all those other things. Don’t make political decisions. There will be other groups that will do that,” Labus said.

Nevada’s governor has a panel of rural and urban county officials and economic advisers giving him input, along with his medical advisory team. Labor groups, politicians and businesses also bend his ear with unsolicited feedback.

The competing voices on how to reopen their state’s economy and what restrictions to impose have led to similar push-and-pulls for governors across the U.S. The decision-making has taken on new urgency as reported cases of the virus continue to rise and governors consider whether to pause or backtrack on their loosening of restrictions. The number of confirmed new coronavirus cases per day in the U.S. hit an all-time high of 40,000 Friday.

Some states, including Texas and Florida, have begun reversing some earlier steps intended to reopen their economies.

In Utah, coronavirus cases have been surging since most businesses were allowed to reopen in May. Gov. Gary Herbert, a Republican, has paused lifting any more restrictions and has strongly encouraged people to wear masks.

He faces strong opposition if he tried to make it a mandate. An interest group founded by a conservative activist to push back against coronavirus restrictions, Utah Businesses Revival, has actively campaigned against mask wearing or any renewed restrictions on economic activity. They and others have held protests that included an anti-mask demonstration at the Utah Capitol.

North Carolina’s governor, Democrat Roy Cooper, earlier this week announced a statewide mask rule and three-week pause on further reopenings, moves that were supported by a nurses association. But Cooper has faced pushback from Republican lawmakers and small businesses that are still shuttered, including bars, gyms and bowling alleys, which have tried to overturn the governor’s orders through legal action or legislation.

South Carolina’s top infectious disease expert this week said a statewide requirement that people wear masks indoors would be a great help in what she said was a “critical juncture” in fighting COVID-19.

That advice from state Epidemiologist Dr. Linda Bell runs against the public stance of Republican Gov. Henry McMaster, who continued to say this week that a mask requirement would step on personal liberties and be too hard to enforce. McMaster has largely sided with business interests throughout the pandemic.

“If we could go to the epidemiological extreme, we would close everything down and have everyone stay inside and have everyone wear masks. But the country would fall apart,” McMaster said Friday in his first news conference with health officials in more than two weeks.

As West Virginia has seen a spike in reported virus cases, Gov. Jim Justice fired his public health commissioner Wednesday. While the departure was over a data dispute, the move exposed a philosophical rift between Dr. Cathy Slemp’s plea to “stay true to the science” as new outbreaks emerge and the Republican governor’s aggressive schedule to reopen businesses to get the state economy moving again.

National Nurses United, an umbrella organization for nurses unions across the country, called on governors in states with rising cases to reimpose strict limits on businesses until stronger protections are in place, including more protective equipment for health care workers and more robust testing and contact tracing.

Stephanie Roberson, the director of government relations for the California Nurses Association, an affiliate of the national group, said Gov. Gavin Newsom’s office has heard her group’s concerns but didn’t seem to be listening.

“We need to look at the science, and the science is telling us that we have a significant uptick and we’ve got to pull back,” Roberson said.

Newsom and state health officials have said the goal of the stay-at-home order imposed in mid-March was to prepare the state’s hospitals for a surge. Earlier this week, he touted the importance of opening businesses to ensure the health of California’s economy while warning that if health conditions grow dire, the state could be forced to shut them back down.

But on Friday, Newsom was forced to act. He urged Southern California’s Imperial County to reimpose stay-home orders amid a surge in cases.