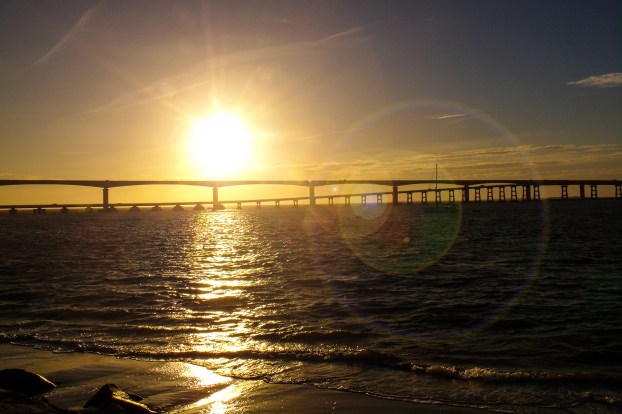 Both versions – old and new – of the Herbert C. Bonner Bridge over Oregon Inlet can be seen in this sunset shot. According to Randall Chesson of PCL Civil Constructors, “a lot of the current work is ‘unseen’ since it involves the installation of utilities under the approach spans and inside the segments.” Cooper Kinsey, summer marketing intern for PCL Civil Constructors, Inc. photo

The hope to open the new Herbert C. Bonner Bridge over Oregon Inlet to traffic in late December or early January “is not going to happen.” Pablo Hernandez, the project’s resident engineer, told the Oregon Inlet Task Force members on Tuesday the bridge should be open to traffic by the end of February or in early March 2019.

The span deck has been completed and now subcontractors are putting finishing touches on the bridge that will connect Hatteras Island to the northern Dare County beaches. The new Herbert C. Bonner Bridge, begun in March 2016, is nearly three miles long and cost $246 million. It replaces an aging span that will be demolished after the new bridge opens.

Hernandez said the old bridge demolition will take months of coordination before the demolition begins.  The demolition requires water-going cranes to be assembled and barges to be in place to move the debris offshore to an artificial reef site. Adequate water depth at the inlet for the demolition vessels will need to be maintained. Demolition completion is scheduled for late 2019.

In a later conversation, Hernandez said the progress on the new bridge has been amazing considering the aggressive schedule. He said schedule delays are not unusual with large construction projects in such an environment. Adverse weather has been a challenging part of the project.

Another progress update should be released in January.

All together now: Last Bonner bridge girder in place